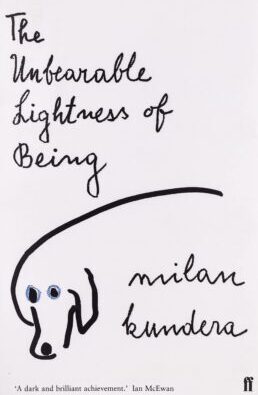 In his book The Unbearable Lightness of Being, Milan Kundera reminds us that “we can never know what to want, because, living only one life, we can neither compare it with our previous lives nor perfect it in our lives to come.” Given this reality of being human, we can understand our life choices in one of two ways. The first is to see our decisions as being quite “light,” for we are but one spec in the grand space of the universe and vastness of time. Alternatively, living only one life can leave us with a sense of the deep heaviness of any given choice, burdened with an awareness that even the smallest decision can have eternal consequences.

As anyone who knows me well would verify, I have a hard time deciding. Decisions are especially heavyaffairs. Any given choice can feel like death to all other options. Whether specific to where to go to college, what to do in my career, who to date or marry, my love of options and fear of choosing wrong hovers eerily over my decision-making process.

For people with this affliction, a natural response is to pursue a strategy of optionality – being drawn to paths that expand the total options one has available to pursue. After all, what is not to like about options? Take career, for example. Having a larger set of choices around what to do (A, B, C instead of A alone) would seem to increase your likelihood of finding a “better” option, whether defined by some objective metric (pay) or subjective property (perceived fit, or happiness). Imagine that your family expects you to take over the family veterinary business and make $100,000 a year (not a bad path!). A strategy geared around optionality might add to this list the possibility of becoming a high school teacher making $50,000 or a pharmaceutical sales rep making $125,000. The larger set of options should allow better matching by preference, whether that ultimately means aligning with family expectation (vet), maximizing income (sales rep), or doing something you have always wanted to do, such as working in a school (teacher).

Beyond matching at any particular point in time, a strategy of optionality seeks to optimize for the possibility of a better set of choices in the future. This is often what I find myself counseling students for, rightly or wrongly. “Have a decision? Pick the choice that expands possibilities for what is next.” Again, here, optionality has some benefits.  Let’s say you see variety as the spice of life. In this case, you might find a 40-year career of rotating roles every five years more energizing than maintaining the same role over time, even if the particular “fit” of the latter is higher.

But if an optionality strategy is attractive for purposes of maximizing one-time fit or preparing you for a change of fit over time, this mentality has a shadow side. In his book The Wisdom of Finance, Harvard’s Mihir Desai puts it this way:

I am no longer surprised to see students who end up remaining in companies—usually consulting or investment banking firms—that were initially intended as way stations that would create more optionality on the path to their actual entrepreneurial, social, or political goals. They often end up saying to themselves, “Why not stay another year and create more options for down the road?” The tool that was supposed to lead to more risk-taking ends up preventing it. Any commitment necessarily must overcome the loss of option value that choices close off… It is not uncommon to hear people in finance talk about marriage as the death of optionality. Implicitly, the act of marriage is characterized as the loss of something—future choices—rather than the beginning of something. As a result, a focus on the creation and preservation of choices can ironically lead to an inability to make choices.

This shadow-side of a life of optionality should not be underestimated. One challenge faced by those who love options is that stable optionality is a fiction. This can be because you overestimate the likelihood of your ability to realize the options that you want to pursue later. A couple puts off starting a family as they pursue a set of careers under the assumption that it will be easier to get pregnant than it turns out to be. An aspiring academic tells themselves they will pursue a Ph.D. later while not realizing that the Ph.D. committee likes younger candidates because they have a longer window of research ahead of them. A career change becomes more difficult as financial obligations in life pile up.

An additional challenge of expanded options is how awareness of those potential paths can make any given decision all the more difficult. When unable to easily “optimize” given all the potential decisions in front of them, the economist/psychologist/political scientist Herb Simon argued that people often “satisfice” by finding the best option available, even if not the best of all time. But the more aware you are of all those peripheral paths, the more difficult the choice can become. “Sure, I could become a vet, a teacher, or a sales rep, but what about an architect, an entrepreneur, or a stay at home dad?” If you choose to become a vet and a vet is the only option, the weight of the path not taken is light. But if satisficing by choosing the route of a teacher while being acutely aware of the other six (or six-hundred) options, the weight of choice might be great.

And perhaps even more problematic is when we become addicted to the formless possibility of “what could be” instead of pursuing a concrete particularity. While this can happen early in life — being unable to choose a given path– so too it comes later on in life when we irrationally pine for a time of limitless possibilities. In his treatise on middle age, the philosopher Kieran Setiya suggests that when confronted with a path selected, it becomes all too easy to grieve and then idealize the path not pursued. In a review of the book at the New Yorker, Joshua Rothman summarizes the point, “Because the lives of middle-aged people have settled into more or less permanent shapes, for instance, people in midlife often become nostalgic for the feeling of choosing.” To be a permanent shape is to be beset with Kundera’s challenge of being unable “compare it with our previous lives nor perfect it in our lives to come.”

While generating options is a great short-run tactic, this mindset can become our master when unchecked. Our ability to choose and to optimize for a particular path chosen requires wisdom born in an acknowledgment of our finitude. The challenge for each of us is to discern when generating options is life-giving, and where optionality prevents us from flourishing in the here and now of the permanent shapes we embody.