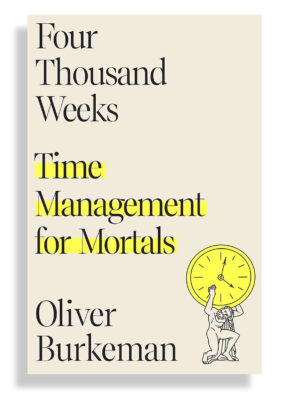 That is the last time I wrote one of these “Towers to Bridges” newsletters.

While only five months time, this gap feels personally significant. Writing this newsletter has been a bi-weekly or, at worst, monthly discipline for the last six years or more. To prepare for the newsletter, I would read throughout the week, jot down notes, and eventually distill it into an essay of sorts on a Sunday afternoon. The writing process helped me clarify my thinking, and I loved sharing those thoughts with friends, clients, students, and colleagues. Metaphorical rain or shine, this was my rhythm.

But then, we had a baby. And shortly after, my role at WashU changed to require spending time and energy building WashU’s Center for Family Enterprise. In other words, time became scarce, and March became April became May became– well, you get the idea.

Scarcity of any resource – time or otherwise– messes with our psychology. One of my favorite treatises on this idea comes from Harvard economist Sendhil Mullainathan and Princeton psychologist Eldar Shafir in their book, Scarcity. Specific to time scarcity, the thrust of their argument is captured in the following review from The Guardian:

Their most arresting claim is that the same effects kick in – albeit not always with such grave implications – in any conditions of scarcity, not just lack of money. Chronically busy people, suffering from a scarcity of time, also demonstrate impaired abilities and make self-defeating choices, such as unproductive multi-tasking or neglecting family for work. Lonely people, suffering from a scarcity of social contact, become hyper-focused on their loneliness, prompting behaviors that render it worse. In one sense, Mullainathan and Shafir concede, scarcity is so ubiquitous as to be almost meaningless.

When time grows scarce – a baby in one arm, a phone in another – I find myself counter-productively pulled in too many directions.

From Finitude to Focus?

Over the last few months, while NOT writing my newsletter, I have grown quite fond of the writing of Oliver Burkeman. His newest book, 4,000 weeks, which comes out today, is a philosophical treatise on the nature of productivity. For Burkeman, the start of a healthy approach to productivity is in the realization of our finitude. We can’t do it all. We can’t be all things to all people.

This framing is interesting in contrast to the work of Mullainathan and Shafir on scarcity. To use Burkeman’s book title, if I only have 4,000 weeks (or personally about 2,100 left), time is by definition scarce. But if finitude and scarcity are somewhat kissing cousins, how do we ensure this realization drives the latter’s wisdom without the dysfunctions of the former?

It seems that the key is moving beyond scarcity as a description of resources to finitude as an existential category. My good friends (and wise scholars) Sara Showalter Van Tongeren and Daryl Van Tongeren put it this way in their recent book The Courage to Suffer:

Priorities clarify in the midst of reminders of death and finitude.

One personal hope is that I am better able to discern true priorities from those projected onto me. I like how Paul Graham puts it in his essay on doing what one loves:

Prestige is like a powerful magnet that warps even your beliefs about what you enjoy. It causes you to work not on what you like, but what you’d like to like.How much of our lives are oriented around what we would like to like? For me, that answer is often far too much of it.Putting it all together, my hope for finitude is to find clarity in how to focus deeper on the things that matter – valuable aspirations over rootless ambition. Burkeman’s book brings extra value to the table in how he translates these ideas into very tactical suggestions. He encourages us to construct days that reflect such finitude, keep focused on a manageable set of to-do items, and reminds us that achieving but two to three hours of truly creative work might be more than enough. I look forward to seeing the argument in full in the book.

The funny thing about all of this is that when I first started telling people about the book, I thought the title was 40,000 weeks. In one of my more depressing Googles of the summer, a quick search made me drop a 0 and feel like I had lost 36,000 weeks of living. But perhaps this error makes even more acute such finitude. More importantly, I hope that we all find a healthy response is not rushing around in trying to accomplish all, but to plant where we find ourselves, invest in those relationships we are in, and pursue worthwhile projects that sit right on our front door.